Here's to Hopes for a Great New Year

Please accept my sincere best wishes for Une grande Annee, as has been wished to me and my family by my good friend Christophe Drochon, which translates as  'a great year', 2013. I'd like to thank all of you who have visited, nearly 3,000 souls.

As you've seen this site deals with a microcosmic stint in time, around 20 years I spent doing Freelance Illustration in and around the San Francisco Bay area from '82 to '02. it was during that time that I made many friends in the field, including Christophe, a master of Wildlife art, and Carl Buell, another of the same mold, and long time associate Robert Evans. All agreed to pose for me in various ridiculous ways for the game covers we love so much, and as a thank you, or in the case of Christophe, Merci beaucoup, I'd like to offer you a look at their websites. The three are fantastic artists with a fine sense of realism, color, and design,  and for Carl and Christophe, a love for the creatures they portray.

So without further ado, behold Christophe and Carl back in 1988, posed for SNK's 'Guerrilla War':
As you can see, Christophe didn't make the final cut. That fell to my studiomate, Robert Evans, but he gave a strong portrayal of a wounded hostage being rescued by the intrepid Carl, blasting away on full auto, under the withering fire of the enemy opposition. 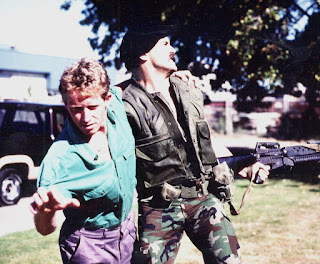 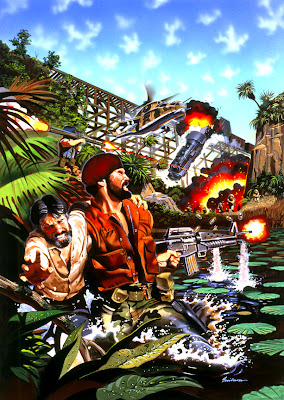 The enemy in this case had the support of a soviet production armored Hind gunship, and a steam locomotive!

Meanwhile, Christophe, Carl, Robert, Thanks for all the wonderfully wild times, and to all who visit:

Have a HAPPY NEW YEAR!!