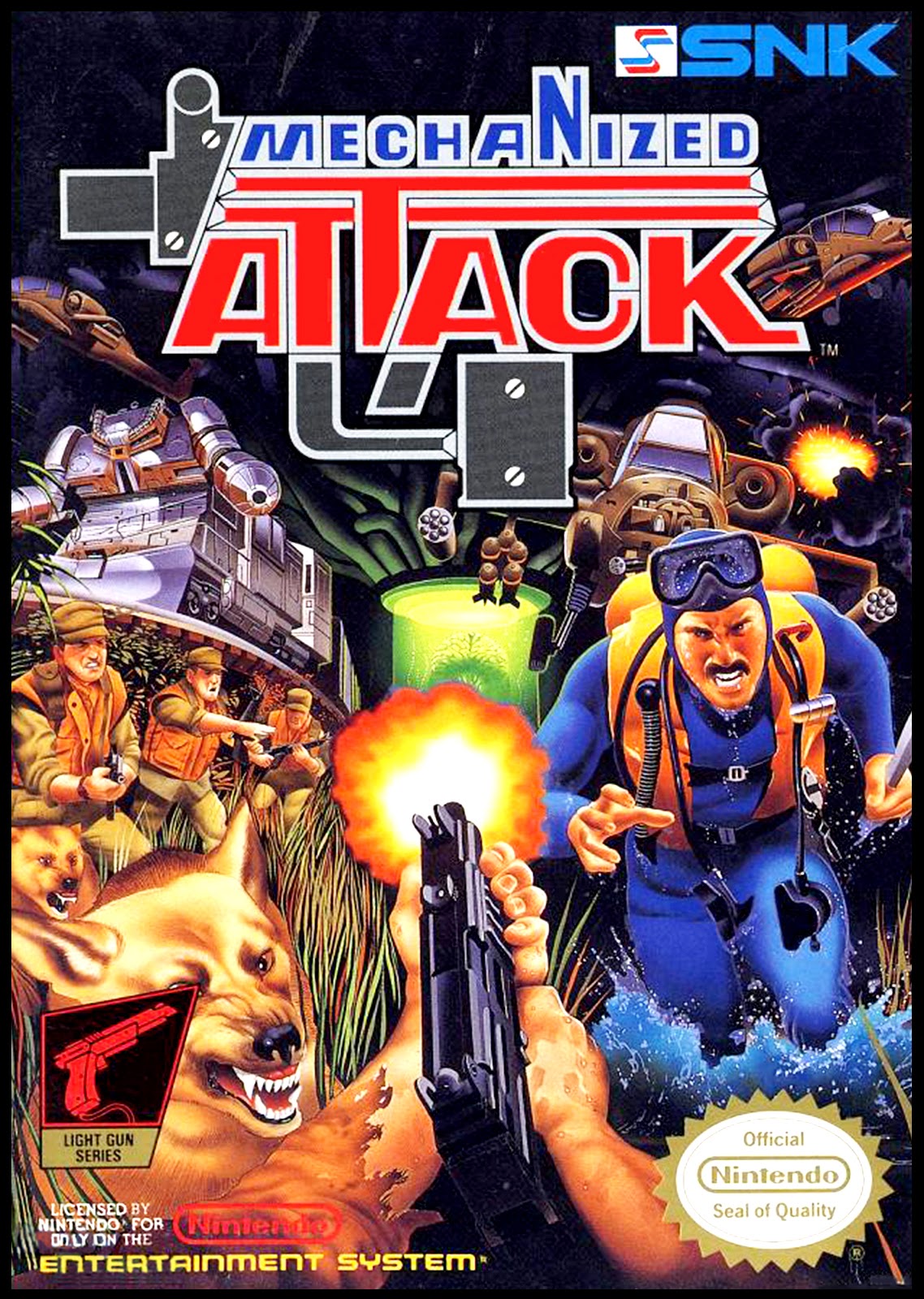 In late December, 1989, I received a call from a design group named Beeline, in San Jose. They were in a panic about getting an illustration done for the cover of a new SNK release tentatively called "Mechanized Attack", and they had 6 days to produce it from sketch to color!! The only problem was that this shooter game, in addition to a Boiling Brain, had every malevolent enemy known to man, and a few not: An evil robot headed train? There were thuggish troops that are actually cyborgs, Battleships, attack
choppers loaded to the gills with armaments, cyborg DOGS?…and vile attack frogmen wanting to get inside your guard and shove a K-bar shiv into your guts!

HURRY UP and WAIT.

I immediately began throwing together sketches and lining up gear for shooting reference models as rapidly as possible, but the client had a sudden realization that the release date couldn't be met in a number of ways, so the project slowed way down. In the end we had plenty of time, and it became one of my most chaotic jam packed fight scenes ever, and it was great fun.
This product was an NES platform using The Light Zapper application, and in the earlier arcade iteration allowed the player an Uzi style machine-gun to wield.

How can I say any more about Carl Buell than I already have in prior posts? Here goes: What more could any illustrator of adventure themed imagery want, than a tall, great looking hunk-like matinee idol styled illustrator for a friend, daytime studio mate, and willing model?

Granted, he could be a pain in the neck, but in his time he had been a model, the lead singer in a touring upper NY State rock group (that actually made money), a Vietnam veteran (shot in the Gluteus during a firefight and sent home with his drawing hand intact holding a Purple Heart) , a semi pro football and baseball player, and to top it all off,  is a world class drawing talent in demand for his art of the natural, and prehistoric, world.

Whew, that's quite a catalogue, yeah?
Like me, to this day, he is still making his living illustrating.
So, who better for our menacing flipper freak? He also posed for the Cyborg Guards, The shooter's hands with our studio Uzi, the Robot Train, and the Attack Dogs! (…just kidding about the last two.)


This 4-transparency inclusion photo (if enlarged) will give you an idea of just how lame our photo sessions could be. Although we had photo flood lights, the sun blasting through the ceiling to floor windows at our studio at the foot of Telegraph Hill in North Beach usually rendered them useless. It was basically, "Just stand over there Carl, and I'll put up the tripod here and we'll bang these off and get them to the lab!" We were always in one another's way, but worked well together. I had 4 to 5 freelancers sharing my space at any given time. Always for at least 4 years. Robert Evans was with me for 25 years, and Carl for 12 years.

I shot 35 mm Kodachrome transparencies, because I could project them down onto the illustration board into the positions I needed the figures. There was always a process of melding the reference shots into the drawing base, then revising angles or body position to get everything to work together.

SO 23 YEARS LATER, I FIND MYSELF TRYING TO CLAIM AUTHORSHIP FOR THE COVER ILLUSTRATION FOR "MECHANIZED ATTACK.'


No signature, no credit line, no proof of authorship?

Proving to Mobygames.com that I WAS THE GUY, came down to my putting together a technique comparison guide between M.A. and another SNK game to which they had already awarded me credit: Guerrilla War. As you can see here, it was a collection of visual similarities that convinced the judges at MG, combined with my log sheet, and invoice from 1990. 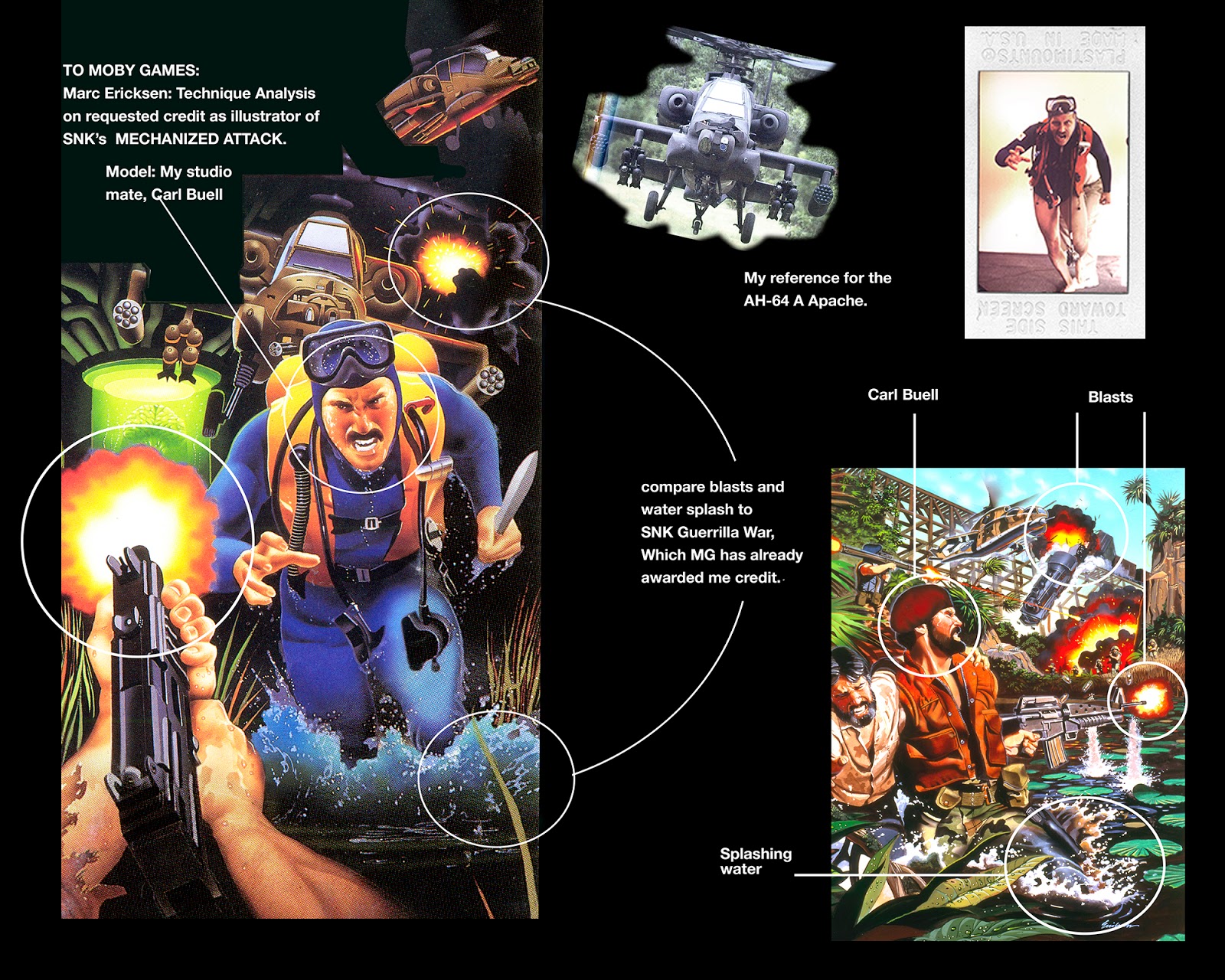 THANKS AGAIN FOR DROPPING BY!  I'll see you at The Portland Retro Game Expo: prge.com

Hilarious proof! To a fan of your work, you have already basically written your name all over the piece with your house style (really, Carl is all the proof you should need!), but MG prides itself on its rigor.

Rigor is definitely the word for Mobygames vetting anything! I trust you guys with the bank when it comes to recording the history of early gaming, Rowan! Keep up the good work. M.-