THE BADDEST of SNK's 'IKARI WARRIORS III The RESCUE' THAT NOBODY EVER SAW!!!

IF YOU PLAYED YOUR GAMES ON AN IBM, YOU MAY HAVE SEEN THIS ART!


Seriously, Take a look anyway, because Vince and Paul really laid it out trying to rescue the son of an important politician,
( IS there such a thing?)...and following a time warp that …wait, what? ...Really?  …A TIME WARP?!

Anyway, they struggle to survive an onslaught of deadly terrorists, strictly for your entertainment back in 1990, and deserve to be remembered today.


Sadly for me this game art was relegated to the outer reaches of the market, and really very few players are even aware of its existence today. I hope you will find this bit of retrogame trivia entertaining, and educational, because it is one of only a couple of my game covers for which I can document for you with original sketches, the pathways of art direction that played out, the dance executed by the illustrator and the designer/art director when this box was produced 25 years ago.


The sadness of only a Polaroid reminder of lost art.


The game was introduced to me by a group of designers in the South Bay ( To us San Franciscans that meant Silicon Valley) named The Graphics Factory. I surmise that from the 408 Prefix on their fax replies relative to my sketches. My log notes for March of '90 talk about the fee, and the contact (3-6-'90), naming a designer named Brent, and my invoice dated 4-4-'90, and the two thermofax sheets which you will see here. End of evidence. Of the original art, only a polaroid remains:

The designers had requested a wild and wooly shootout, with hot brass flying, knives whipping around, explosions, tanks, choppers, and the rescue from  abduction of a young boy (In this case my son Richard.) and oh yeah…More explosions. My sketch was sent in based on my photoshoot of various models, including my sidekick Carl Buell  and amazing stuntman Darryl Chan, about whom my readers already know.

The creative process in illustration usually requires a series of directions followed by a series of sketches. Amazingly, I found two faxes in the rabbit warren I call 'my collection'. They were the return replies to the sketches I sent Brent and his boss, evidently named Kent. I know, right? What's up with THAT? Brent 'n Kent?

My kids grew up modeling for me, and they would show their friends the box art to prove it;) 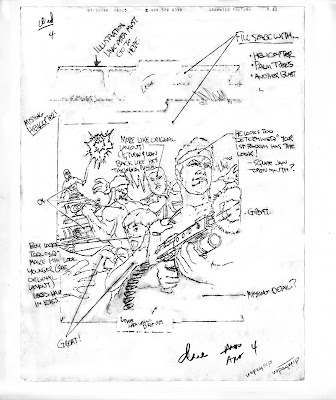 As you can see here, Brent had definite input, and that's exactly what an illustrator expects. Changes are part of the game, and the sketches serve that role. In this case there was also plenty of positive reinforcement, and I'm sure he telephoned in to me his approval of the basic layout. The creative approach always requires movement on both sides, and gratitude is always part of the dialog:

"Thanks for giving me this job, I'm really jazzed and will do my best "…"We're so happy you could fit it in, and we know your work. We are looking forward to seeing what you come up with!" 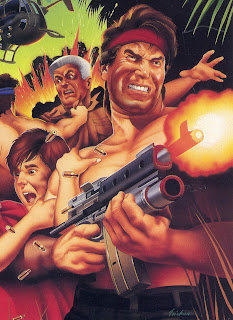 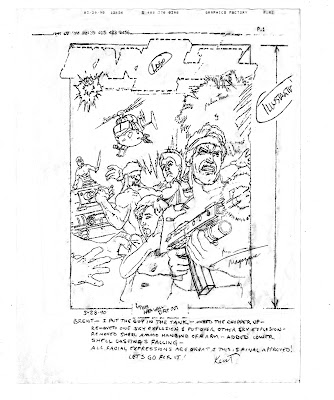 That was the template for conversation in 95% of all the freelance illustration of all sorts that I have been involved with over my entire career. (see marcericksen.com) I have always been grateful for my experiences, and grateful for the attitudes that prevailed. Of course there were those who would generate bad vibes with power trips, but they were mostly fringe players, and a tiny minority of the bent that you can find anywhere in life.


In the final fax, we see Kent sign off on, and instruct me to do what we called 'go to final'. As you can see we had agreed to lose the belt feed, and went to a regular assault ammunition magazine on the weapon the hero is firing in the foreground, and I made my son look younger. I added the chopper, (which I had completely forgotten), And shot a few more photos for a more powerful punch in the middle background.

THE NET NET WAS A REALLY KICK ASS ILLUSTRATION...FOR A REALLY NICHE MARKET.


Luckily I found a really beautiful sealed game for this SNK's Ikari Warriors III The Rescue game online at Ebay and it has joined my collection of the games for which I had so much fun doing art. I have to say this is indeed one of my faves, because I was able to do it with my sons. 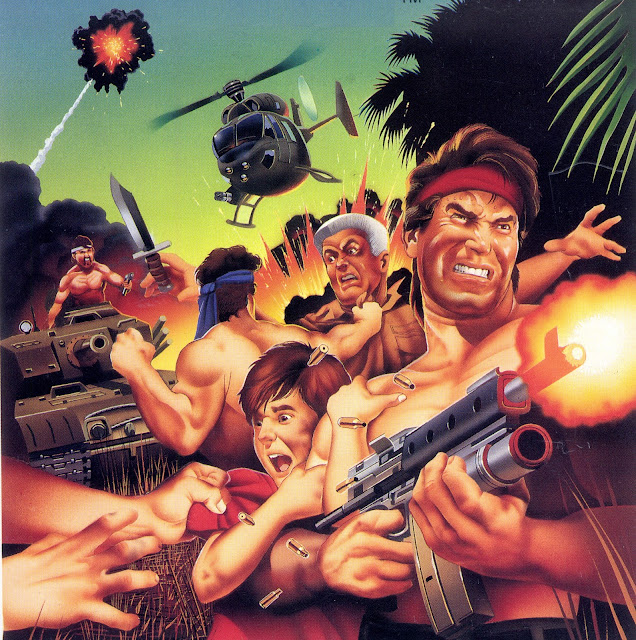 Thanks again for dropping by!

Great breakdown of this - honestly - masterpiece of retro game art. I can't imagine how you could put more macho in this!

Thanks Jordan! It was great fun to produce, the clients were a dream,and the budget was excellent. That the game was for the IBM was the only drawback, but my illustration finally seeing the light of day here. Your comment means a lot to me.

Thanks to your posts, I resolve some problems. The articles bring insight and knowledge. I are eager to read them. Hope that you will write more and more. Good luck!
e-mail with love best 2018 free
apps mobile e-mailwithlove online
koi Nhat

Thanks to your posts, I resolve some problems. The articles bring insight and knowledge. I are eager to read them. Hope that you will write more and more. Good luck!Discount master by autoketing 2019 Product discount apps shopify

I'm going to look for and research my problem, I found your site, it really attracted me and I spent a lot of time reading the post here, it has a lot of information. Useful for everyone, thanks a lot. Discount master app
Discount master by autoketing

I think the information I gathered from this article is very useful, it makes me think differently and wants to try to change myself in the best way.
https://bit.ly/2y8RMwK , https://bit.ly/2QslLr4, app autoketing

Whoever reads the article will want to express his thoughts, I think it is really cool and new to me, maybe I should take the time to learn about it.
Free shipping bar, shipping bar app, autoketing

Your post extremely cool. I glad to be here. I enjoyed reading your articles. Thanks and keep up the good work!

It would be nice if a lot of people discuss this article together, it has a lot of different aspects and I think everyone will have a new way of approaching it.
facebook chat downloader, facebook chat, best autoketing

I was surprised when I read the first lines, it made me think about many things, thanks for posting it.
friv 2018 for school, friv 4 school 2017 free games, abcya club games boys

The author of this post is admirable, it brings a lot of emotion to everyone reading it, let's share it more widely.
happy wheels interesting games online, silly snakes free online games, world craft 2 for school to play

I like this post because it contains a lot of useful information to read, maybe everyone will like me.
Super World Adventure games to play, Gold Diggers Adventure unblocked, Color Road games for school kids

I would love to keep track of your posts, it is really a useful source of information, wish you success.
Heroes Of The City Jigsaw games online, Hobin Rood play now, Gato Slice for kids to play

I do not feel sorry for taking the time to read this post, it is really nice and useful to me, thanks for posting it.
jogos friv online, kizi free online Games, pbs school Games for kids


food games 2019 online
basketball games
soccer games
I do not feel sorry for taking the time to read this post, it is really nice and useful to me, thanks for posting it.

This is the optimal blog site for each individual that needs to disclose this topic. You recognize a big quantity its essentially tough to say along with you (not too When I would certainly prefer ... HaHa). You, actually, put a brand-new spin making use of a topic that's been covered for numerous years. io jogos for kids
play free 2 player game
friv free online juegos

Somebody essentially help to make seriously articles I’d state. This is the very first time I frequented your website page and thus far? I amazed with the analysis you made to make this particular post amazing. Fantastic job!
free games online 2019
friv jogos
jogos online 360

Keep your eye on the sprouting wheatgrass, which should start sprouting within a few days. Once little sprouts start to appear, like below, remove the cover. You should not need to water at any point during this time. If you do, your wheatgrass may be in too much direct light/heat. Also don't over water, because the wheat berries will mold.
kizi 4 girl games
friv jogo
friv4school 2019