I've been slamming with work, but i wanted to take some time to add to the gameart I'm offering.

I chose STRIDER, because I had already made some progress on it, ands a lot of you that I talked to at the Portland Expo mentioned it as a well remembered  game, and suggested it as a desirable one for a high quality print. 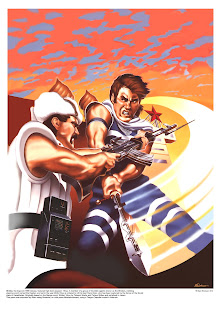 The Strider saga features Hiryu, an assassin member of the Strider cult of high tech killers, who is assigned to take out his best friend Cain, who has been captured by the Soviet (1989, remember?) forces of Kazakhstan. That provided me with some fun photos featuring my studio mate, Carl Buell, lunging his way around the studio in a flak jacket, and AK and a mad bomber hat. Take a look at the image, which I know you'll recall, and you'll see Carl in full attack mode trying to run through Hiryu with his flip out bayonet!! Hiryu is reponding with a killer stroke with his jet assist plasma sword!

Carl had to die a lot of gruesome deaths, but he always did so with great wit and style! 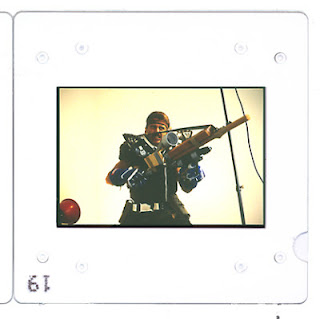 If you check back on this blog, you'll see shots if carl, and other studio mates of mine, mostly other illustrators, leaping about in action poses. When I get to HEAVY BARREL I'll give you the full treatment. Here's the teaser:
Posted by Unknown

Carl is a hilarious reference point, since now that he's been pointed out to me I see him in every other cover... usually on the receiving end of some ultraviolence. Sounds like sharing a studio with you might have warranted him some danger pay! Cheers from Pseudo of Mobygames!