CRY HAVOC!! ..it's XYBOTS! Getting ROUGH with COLOR!! OR: ...How a color rough, Input, and photo shoot works!! 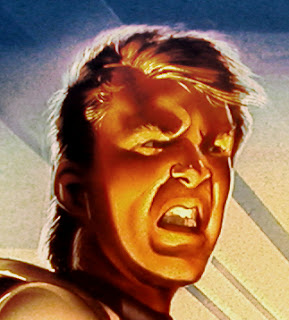 THE INITIAL CALLIt was April,1991 when I got a call to duty by ELISE ROSENTHAL, an ART REP from L.A. who had been given the task of finding illustrators to produce color covers for the ATARI  LYNX hand held game system, which had been released in 1989 to compete with the Nintendo Game Boy, Sega's GAME GEAR, and NEC's TURBO EXPRESS. Although the LYNX was the first hand held console to feature color graphics, and had its COMLYNX ( gotta love that title!) feature for two player engagement, it proved heavy and unwieldy, and was hell on battery consumption.

Elise asked if I had time to take on XYBOTS.


APPROVAL, Then The Color Rough

Due to the tight scheduling, I very quickly sent a pencil rough to Elise for the Xybots layout, after being sent screen shots of the game play and a quick description of Federation Warrior Major Rock Hardy's (and his compadre Captain Ace Gunn's!) mission of cleaning out the filthy robot infestation of Earth's sole remaining outpost in deep space.

That was quickly approved and the next step entailed my execution of a COLOR ROUGH. This step, which was required in almost every game title I rendered, was always a rushed one day affair, typically using as its base a xerox of the approved rush sketch, and any color medium I had on hand, usually ad markers, colored pencils, the odd bit of airbrushing, and final touches of gouache, an opaque water color medium. Everything was messengered, or Fedexed in those long ago days, so the input from Atari arrived a day later.

As you can see (below),  they wanted me to play up the corridor arrangement, and put more in the way of flames and sparks on the dying robot at Rock's feet., but otherwise approved it. (Click to Enlarge.)


AT THIS POINT,  I approached the guy I thought would be the PERFECT Rock Hardy: My upstreet neighbor, JIM BRUENER.

Jim had patiently put up with posing for me in the past, and showed up as PITFALL HARRY in the on board poster art in the Activision Pitfall game, as well as various other characters: the American Paratrooper in my V4V Utah Beach cover, and a K-9 Cop in my America's Finest for 21st Century Ultimate Soldier series. While Jim didn't have my military background, he was an ex Richmond, CA.  Police Officer,  had seen some of his own actual home grown combat, and knew what it felt like to be staring down THE DOUBLE BARRELS OF A SAWED-OFF SHOTGUN ( literally!). He knew from EXPERIENCE what I meant when I said I wanted to see FEAR, ANGER, and ACTION all in his expression.

SHOOTING
REFERENCE
The shoot was conducted in my living room, using my Olympus SLR and a couple of photo floods, and a couple of cold beers. We had an array of motocross protective gear, and a laser tag blaster, plus my old    camo BDUs.

THREE DAYS LATER< DONE< AND done.
The result was completed within 3 working days at my North Beach studio at 1045 Sansome St., San Francisco, CA.,  in Room 306. I did the art at around 20"X30" on cold press illustration board, using my trusty Thayer Chandler airbrush.

I don't recall any revisions, however we ARE discussing an event that occurred 22 years ago!

Many thanks to JIM BRUENER for helping me create something many of you still enjoy today!!

Thanks for dropping by!