The Eighties, when a lot of the fans of retro gaming were creating their love for THE 8 BIT WORLD OF RETROGAMING, an awful lot of activity was happening in the land called Silicon Valley. As it happened, serendipitously for me, I was just into free lancing illustration in the City, (as we styled it at the time), or San Francisco.

The city was emerging from the beats of the BeeGees into the Go Go flash world of the eighties, and THERE WERE HUGE THINGS GOING ON SOUTH OF HERE IN PLACES LIKE PALO ALTO, CUPERTINO, MOUNTAIN VIEW AND SAN JOSE. I was already engaged by a number of firms who required high tech cutaways of various devices that spewed out Bytes, bits, packages, waves, circuits, silicon, wafers, you name it. The late 70's into the new century, HIGH TECH ARTWORK WAS PROMINENT IN THE BAY AREA.


Some of the first work I had done in the late seventies, while engaged as a staff illustrator for a little shop on Gold Street (near where the ships used to dock, only to lose their crews to the Gold Rush in 1849, and where miners would come to weigh their gold dust...) called ARTWORKS, and it was involved a little item called PONG created BY NOLAN BUSHNELL and Atari engineer ALLEN ALCORN, on their 1978 release of Atari's 2 player version.

I don't believe the design we put together was used by Atari, but it was my FIRST EXPOSURE TO GAMING as such.


LET THE GAMES BEGIN!  I opened my freelance studio in 1980.


The gaming thing really started for me when I was called by DOUG CARLSTON  from San Rafael where he had headquartered his firm BRODERBUND in a small office space at 1938 4th Street. Doug was soon joined by his brother GARY, and his sister CATHY. This was in 1982, and he needed an illustration for a game called Labyrinth.


These pieces went for the price of $1,000 at a time when I was getting 4 to 5 times that for the high tech stuff, but this was SO MUCH MORE FUN!!


Typically in my career, the fee for various game art would depend upon who the client was, the uses for which they wanted to apply the art, the complexity of the piece, and the fun factor for me.

The Broderbund pieces went for a lower fee because they were building their base and were not yet an Atari. I loved working one on one, sketching with visionaries like Doug, an Ivy League trained Attorney turned entrepreneur.

I was incredibly fortunate to have  located my San Francisco studio in  North Beach.


This was not a planned move. It was in fact only two blocks from Artworks, where I had previously been working since 1978. I felt good about the tech work I had procured, and was feeling pretty comfortable, having no idea of the enormity of the soon-to-explode game industry. It's an understatement to say I was well placed, and have thanked the lords of fortune for that, one of the many events in my life that have fallen especially well for me! 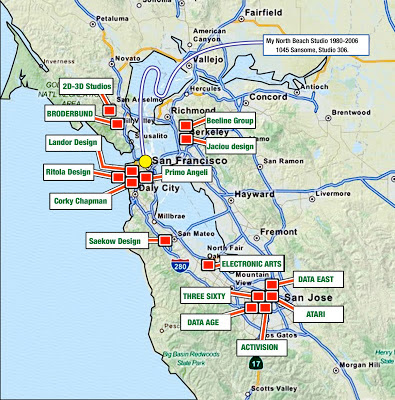 As you can see by this map showing the locations of the major game makers, I WAS SITTING RIGHT IN THE MIDDLE OF THE ACTION.

Most often I worked directly with the companies, but there were many times when I would be called by designers, hired by the companies to do their packaging design.

It was a great pleasure working with talented designers like Roy Ritola (HesWare), Louis Saekow (Tengen), Corky Chapman (Activision posters). and Primo Angeli, one of the most revered designers in San Francisco, among others. 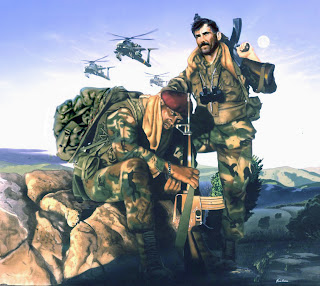