MENACE and MAYHEM: WHERE I DREW MY LINE IN THE BLOODY SAND OF CHOP 'N DROP!!

My aversion to showing the red spray of blood in my work began relatively early in my game cover career facing an Activision game called CHOP 'N DROP... At this point, my own fine young sons, Christian and Richard, were pretty heavily into gaming, and I recognized that they were playing arcade games that dealt with such grotesquely revolting images as the ripping out of opponents' bleeding spinal cords during virtual reality ass kicking hand to hand Mortal Kombat.


To say this was an anathema to me is overstating the case, but I certainly wasn't pro- spinelessness. ( Is that even a word?)

Why Stay Away from Heavy Blood Work?

My military experiences in Asia were (a) in front line units, and (b) in remote small team units working with Indigenous combat elements. I found myself sporadically under fire, and could count perhaps a half dozen instances where my continued existence was down to a coin flip: Five times because the NVA or VC wanted us dead, and once when a U.S. Special Forces heavy mortar team (four deuce) just flat screwed up, dropping a dozen High Explosive rounds onto our small position, at the same time as my team was being engaged by the VC in a midnight  firefight.

While overseas I had friends killed and wounded, and I became acquainted with what heavy, razor sharp, steel shards at high velocity are capable of doing to human flesh. Mostly I learned that there is a great deal of blood in every human body.
I was extremely fortunate never to have been involved in a long, sustained, and brutal hand to hand engagements. (Think Au Shau Valley, Dak to, Hamburger Hill.)

Two months after leaving after my first tour however, my team was overrun, and 2 of our 5 members were killed in action, including my replacement.


I had certainly seen enough blood.


Upon meeting the creative team,


a writer and an art director, we began discussing the elements about the game that they wanted to feature. This was 1988 and Activision was trying hard to get games out, but this particular game, based on EU's 'International Karate', was never destined to do well.

I was determined however to give Activision a compelling illustration. The actual play was anemic (if I may use the word), so we were casting about trying to think of a hard hitting image. I thought perhaps a face kick close up would fit the bill, and rapidly sketched out the thought. I mentioned the old Friday Night Fights that my dad used to watch, and the newspaper photos of boxers like the original Sugar Ray Robinson, and Rocky Marciano, in mid punch, and seeing the sweat spraying off their opponents faces. (Sweat is sweat, but blood is blood.)

They were very excited, ...it was then that the art director, who had probably never seen anything worse than a paper cut, wanted BLOOD. LOTS OF BLOOD!   OOOH, and maybe some TEETH!!


I had to stop them, and questioned whether all that blood was necessary for a good design. They seemed stunned by the idea that maybe it wouldn't be appropriate, or worse,  even desirable.


They were adamant. They were also in charge. There was some good natured cajoling on their part, attempting to pull the bit in my teeth in their direction. I think it may have been the first time I had actually faced this issue, and my own reluctance.

I realized then how important it was to me, and finally forced myself to suggest that perhaps they needed someone else to do their job.

I offered them the sketch and the concept, and said there would be no charge.

As I began gathering my gear to leave, the A.D. heaved a huge sigh and said,"Can we at least have a red background?"  ... I was in the clear., and the red background really looked excellent!


THEN IT ONLY CAME DOWN TO CONVINCING MY STUDIO PARTNER CARL BUELL TO POSE WITH SOMEONE'S FOOT IN HIS FACE!!

...Remember, all this was for a game practically NO ONE BOUGHT!

For the life of me, I absolutely can't remember who volunteered their foot. but it was WELL WASHED!

NATURALLY,   HE AGREED! WHY? BECAUSE HE WAS THE BEST!! 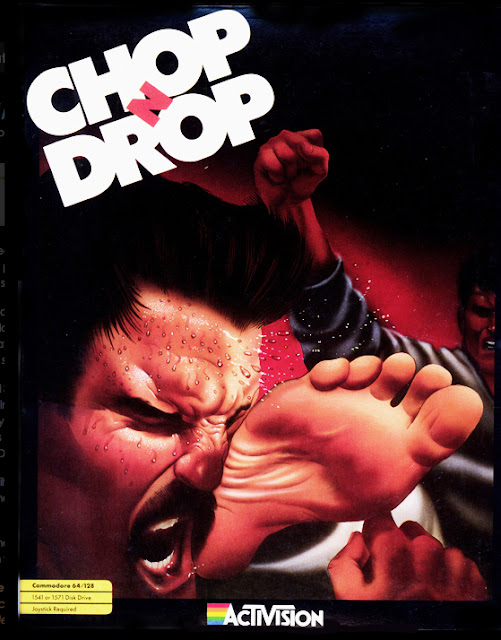 The Resulting package, with its clean design, fun and impactful illustration, and great Logo has always been one of my faves. It's sad that the game itself couldn't deliver the same sort of experience! If you Google Image Chop 'N Drop, you will find only 2 or 3 pathetic reminders of it's past existence. I'm sure over time the images I've put up in this post will eventually find their way to Google image, and at least the story of its package design can be heard.

Thanks for Dropping by again!

Next post: the wild and woolly world of the ART of SNK's MECHANIZED ATTACK!!  ATTACK DOGS! UZIS!! ROBOT TRAINS! ATTACK CHOPPERS!!! and a CRAZED UDT DIVER GONE BERSERK!!   ...What's not to love?

Marc, thanks for this story. I met you at PRGE last year. I was printing and selling gaming posters with my old Epson 7600. We talked a bit about our war experiences. I did 2 tours in Iraq as a mech infantry platoon leader and a mortar platoon leader. When you've seen real blood and guts (from your friends no less), it's artistic and entertainment value are greatly reduced. Thanks again, and I'll be sure to talk to you at the show!

Thanks for understanding Nathan, and of course, thanks so much for your service!
We seem to be swimming in a river of blood in current pop media applications, and I wondered whether my quaint story of trying to staunch the bleeding at least in my own offerings would be met by with a cold slap from the fans.
Maybe I'll find out at PRGE. I wish every guy could somehow get a real taste of the ass-pucker factor you and I are so familiar with. Maybe the fascination with the current visual flood of blood would dissipate.

I started out as an 11 Bravo in a stateside Mech unit, as a track driver and gunner, before going to Artillery OCS at Sill. My first assignment in Vietnam was as an FO with a Cav unit,1st of the 4th Cav. (Darkhorse) then an AO adjusting fire from choppers. Then volunteered to advise VN Regional and Popular forces Infantry. That's where I got my CIB, and closest to termination.

I'll look for you at the show!