Hangin' at The PRGE 2013, The Portland Retro Gaming Expo with all my friends!!

My booth was overrun by the Spartan Family!!

In the ensuing mayhem I never got the names of the enactors involved, but was grateful for their willingness to rampage into my domain for a  photo op. There were many at PRGE in full regalia and out for fun, including this sterling group, all of whom were sweating hardily in their magnificent costumes in order to provide visual relevance to the proceedings. Many thanks to them!! 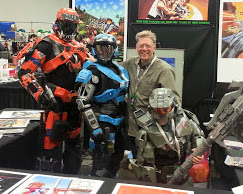 The 2013 proceedings were off to a roaring start with the opportunity to once again see the many people I have met in this arena and have come to admire for their wholehearted devotion to a time and place where I spent many years of my professional illustration life, the world of retro gaming. Among them Rick Weis and his crew who carry so much of a load to ensure the thing lifts off the ground each year, and Dain Anderson, of NintendoAge, who kindly offered me space on his site's auction pages to raise money to make the trip.
It was terrific to see again Killercinematographer Christian Dietering plying his trade with NA, though with a wounded computer backup, and wild man SupercinematographerTaylor Gilbreath  of Radium Z fame, although we dearly missed seeing his daughter Trinity on this trip, and our friend John Domer, who had volunteered to join the many whose efforts made everything work. 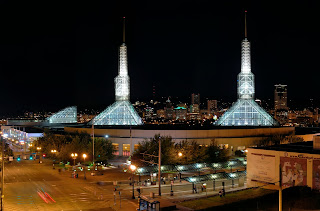 The whole shebang happened Portland Convention Center, a top notch venue in the wonderful and friendly city of, you guessed it, PORTLAND Oregon, the city where my own father spent his misspent youth, and a placed he always missed!

I had redone my banners, and gone to a full half Booth, and invested in a series of professional printed 18"X24" high quality prints of three of my titles that seemed to me to have the strongest following: Megaman 2 (of course), Galaga ( The Atari 7800 version), and Tetris of Tengen fame.


This was posted on very little sleep, and I hope you can forgive my brevity! To say that PRGE was a blast is an understatement!! More on PRGE to follow soon!!

The new line up and the debut of the large format Mega Man 2, and the show results!

Thanks for checking in!

I would like to thank you for your contribution to the video game industry over the years. I recently watch a video on youtube of a guy who purchased a large Mega Man 2 print out at the auction in Portland. Here is his video of him surprising his friend with your artwork. I figured you would appreciate his reaction. http://youtu.be/Hdp6P8MvYRI

Thanks Selksae! Check my latest post, about Johnny and Rob Man. It was a wonderful story!