OUR LOSS of INNOCENCE: Into the new Millennia, Color FADES, and Game Box Art Enters a New and Darker World.

IT HAD TO HAPPEN: The earliest days of video gaming was lean on graphic sophistication, but was one of the earliest users of the new medium of color television technology. Imagine creating your colors using light, actual glowing light, as your palette!! The gameplay was awash with light and color, and a treat to the eye. Gamers forgave programmers for the unrealistic imagery, because after all, it was so cool to be able to reach into the picture and actually dictate (to a degree) the actions of the characters! Prior to that viewers were captives to whatever television executives and actors put before them, the action was ordained by the script. We illustrators were turned loose to create a visual matrix to guide the players with fleshed out versions of what the pixelated worlds and  graphic gameplay was meant to represent, and to create Box Art to bridge the gap:

STRONG, BRIGHT COLORS WAS THE NAME OF THE GAME.

From the age of about 30, I was involved in the creation of Video Game Box Art for almost every company producing games for players, and the key was always attempting to visualize in an exciting visual of what I was shown on the screen, for the purpose of enticing gamers to try the new game. I also produced a lot of what was called P.O.P., or Point Of Purchase display art. These were typically posters, but could also be stand up counter top cutouts, and even banners. Activision was a company that issued very design oriented box art, and to counteract the approach would often feature P.O.P. materials and magazine ads that were much more realistic. I did several pieces for them for their top selling 'Pitfall', starring Pitfall Harry. Again, intense color was a key element.


When Capcom created a game named UN Squadron, they contacted me to produce a large poster for their distribution, and I felt the color intensity for this piece deserved to be striking, so I chose a strong yellow orange sky as the backdrop for their dueling aircraft.

THE MODEL HELD FOR TWENTY YEARS


Strong color and value, and entertaining and exciting action, carried video game art for 2 decades, before the cracks began to appear: More realistic gameplay animation was a consequence of technological progression, and I had known from the beginning that it would become the major force in box art, and eventually negate the need for illustrations from outsiders to be done for covers.


It was actually amazing to me that it took as long as it did, to be honest. I was always cautious not to be exclusively a video game artist, and my clients over those two decades included tech companies like Varian and Intel, for whom I did high tech cut away art, And companies such as Ocean Spray and Hidden Valley, illustrations for food product packaging, cartooning, presentation art for The Chicago Field Museum, and The Ford Aviation Museum in Dearborn Michigan, through Academy Art Studios. I also continued to do storyboarding for most of the major Advertising Agencies and Design firms in San Francisco, , as well as editorial and sports illustrations, doing art for the S.F. Giants, San jose Sharks, the Forty Niners, and the University of California and Stanford Football programs. 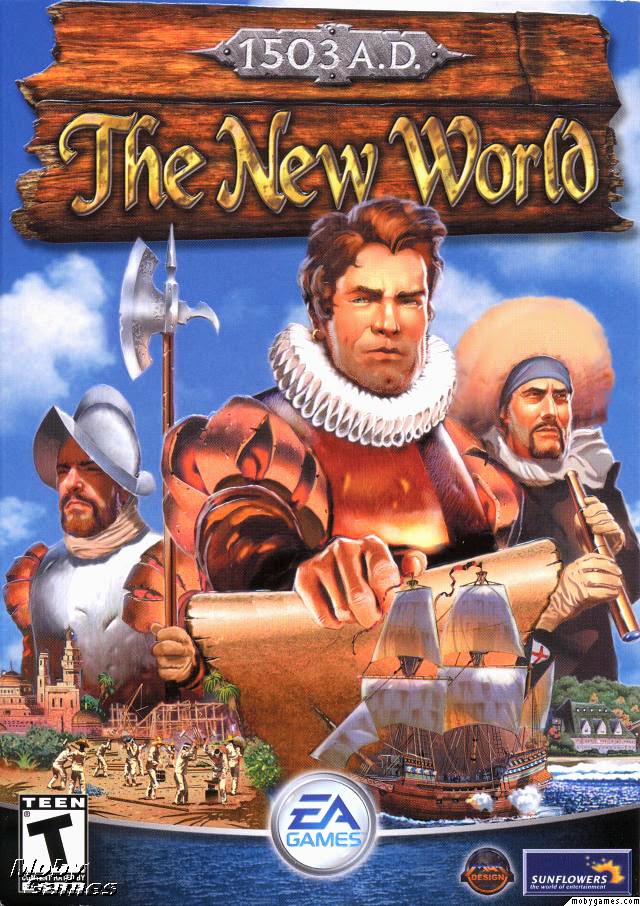 I saw myself through the transition to digital media, learning, with the great help of my studio mate of many years, Robert Evans, to use Photoshop, and to a lesser degree Adobe Illustrator.

IN 2003, I DID MY FINAL VIDEO GAME  BOX ART.
Electronic Arts  contacted me to do 'The New World 1503'. Fittingly, Robert posed as the Conquistador soldier behind the Viceroy adventurer, who I made up from sketches. Another close friend, Denis Kelly, a Marin County Realtor, posed as the captain holding the telescope.


THE SLIDE INTO PERFECT DESTRUCTION.

It was at this time that the animation of the games began to appear regularly on the boxes, and rightfully so, as the animation has become incredibly complete, and realistic.


In my estimation, Games began to take on a more sinister dimension. The face that society has yet to find an answer for. Power, control, strength, and destruction. The emergence of first person shooter games of such corrosive reality that the action is breathtaking in the realism of its destruction. I'm alarmed by the addictive nature of their casual brutality.

Just because developers now have the capacity go there, does that mean they SHOULD?   ….My personal view is absolutely not, but I recognize that just as with any culture, we don't come equipped with brakes, and certainly there's no reverse.

So, Batman has been stripped of his bluff altruistic nature as a two fisted crime fighter and friend of the common man, and remade into a twisted confused and dangerous maladroit split personality.


It's ridiculous to deny the role of all of us in the early days, or to pretend that because the graphics were more colorful, or the animation was cuter, that the intent was somehow softened, but shooter games have always been out there. It was just  easier to not take them seriously, perhaps. We also leavened them with games like Lock 'N Chase, and B.O.B., and James Pond, Harley's Humongous Adventure. And Especially MegaMan…which brings me back to my original context:

WHERE DID OUR COLOR GO?

If you gather all the pure chroma available on a painter's palette and mix them all together, you'll get a kind of sick brownish gray color. At the risk of sounding like an old guy (...I'm 67 ), looking at recent
game color box art, I have to agree once again with this rant by my friend Taylor Gilbreath: 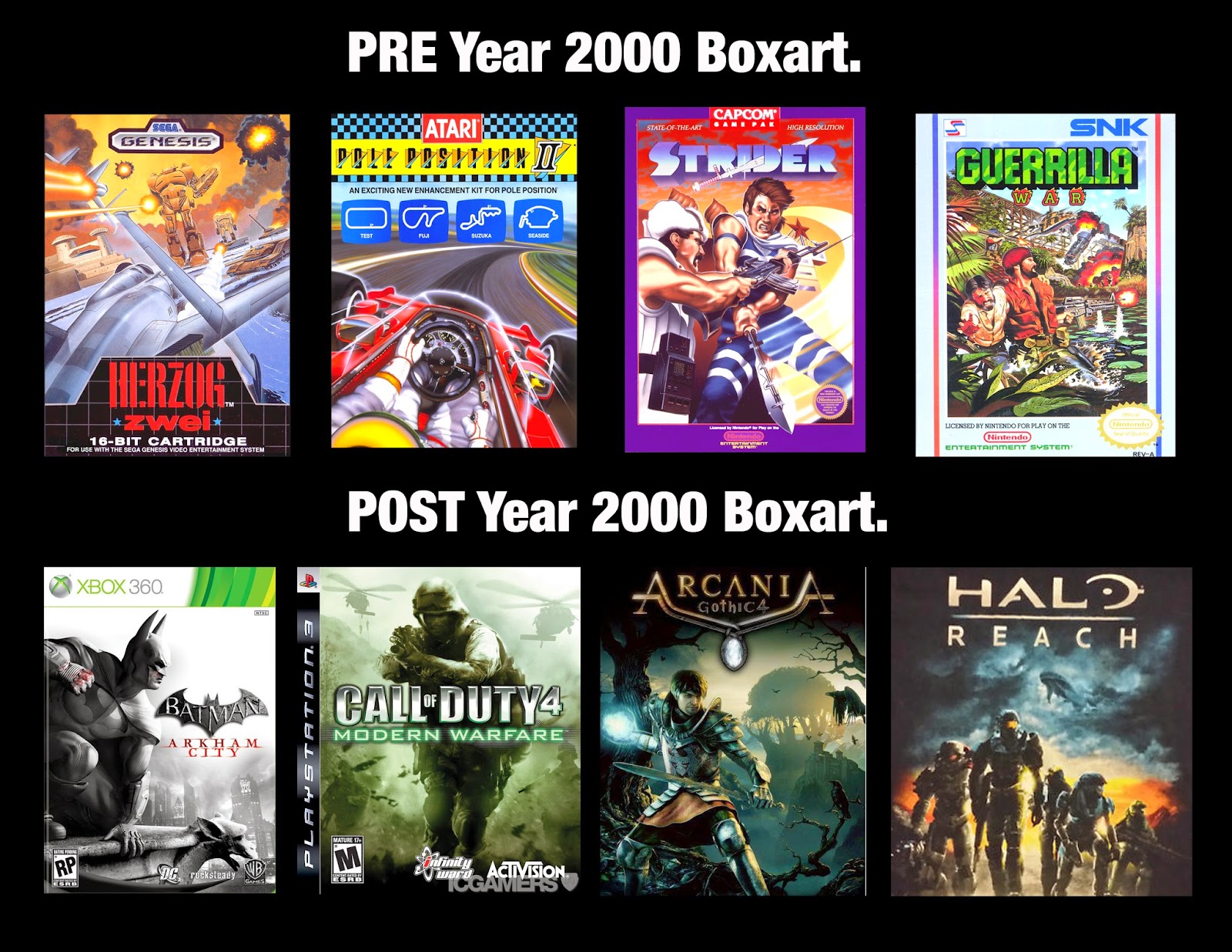 THANKS FOR CHECKING IN!