STRIDER HIRYU and his Plasma Sword FALCHION: The BLINDINGLY QUICK SWEEP of OBLIVION!!

Much has been posited about the incredibly swift strike of the Plasma Sword of  Hiryu, the youngest novitiate ever to reach the A level in the futuristic (2048) organization of assassins known as Striders, a concept created in 1988 by a group of Manga artists named the Moto Kikaku, published by Kadokawa Shoten, and serialized in their magazine Weekly Comic Comp. The image of the Plasma Sword itself was thrown open to interpretation in 1989 when I was contracted by Capcom to create the cover illustration for their video game package of the exciting game that they were developing out of this concept.

The playing field was wide open when it came to Plasma Sword Configuration in 1989.

Working with Capcom on STRIDER.


I had watched the gameplay at Capcom and was very impressed with the speed with which Hiryu was able to wield his sword, and the power of the stroke. The explanation that the plasma trigger allowed the blade to pass through any material effortlessly was a fantastic idea, but didn't necessarily explain the speed of Hiryu's stroke. I drew a preliminary sketch that allowed for a blast assist to the wielder of the Cypher, just fooling around, and the creative team liked what they saw: tiny blast ports pushing the plasma blade through its stroke in the blink of an eye. In studying the sword's shape created by the original Manga artist, the amazing Tatsumi Wada, I saw that he was using a Billystick configuration within the handle: a straight even two-handed base grip with a single grip bar extending 90 degrees out from one side at the top of the haft, like a capital 'T' with one top bar removed.This is a common law enforcement night stick design.

Sadly my blast assist contribution to Cypher lore, although approved by Capcom, never went beyond the art I produced for the original Capcom NES version of Strider, and there are many sites now devoted to the parsing and cataloging of the many variants of every piece of equipment available to Strider warriors. One such site I found very useful was Strider Wikia

Hiryu's opponent in the struggle depicted on the box art is a guard, strangely reminiscent of the old (it wasn't in 1989…) Soviet military, in an area called Kafazu (nee, Kazahkstan?) The guard is equipped with an AK-47 styled futuristic weapon with a nasty bayonet in place, trying his best to kill Hiryu with a lethal thrust, not realizing he's about to be in two pieces, rather than one. On his belt he is wearing some faux Steam Punk low tech  1989 version of a portable communication device. I wanted it to look clunky i.e.. made in russia, and in '89 it did.

In 2014 it looks like he's wearing an old television on his hip. An iPhone it's not! 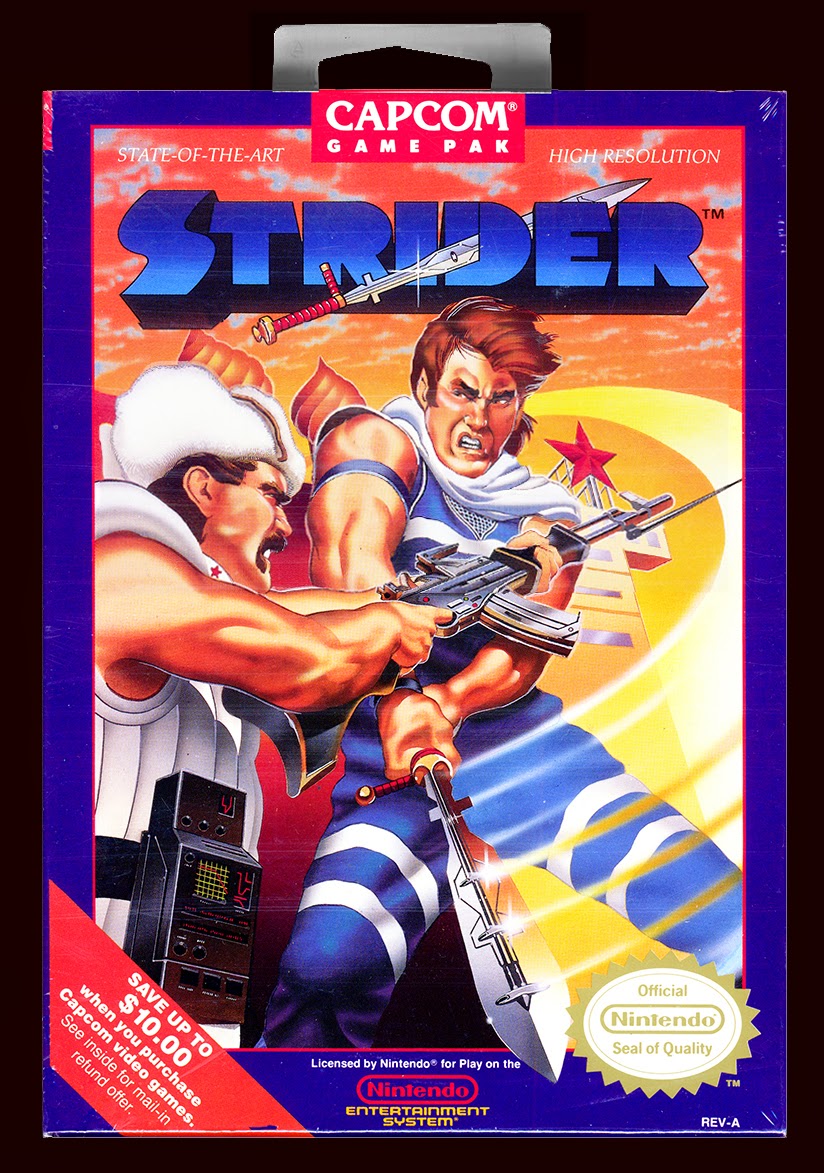 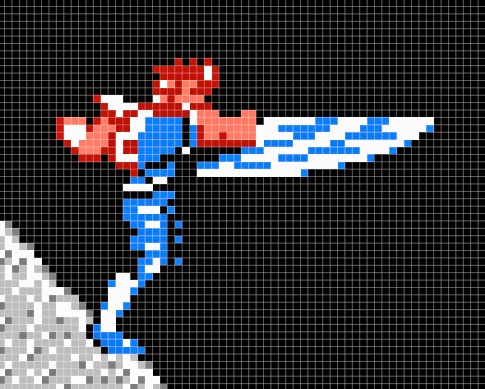 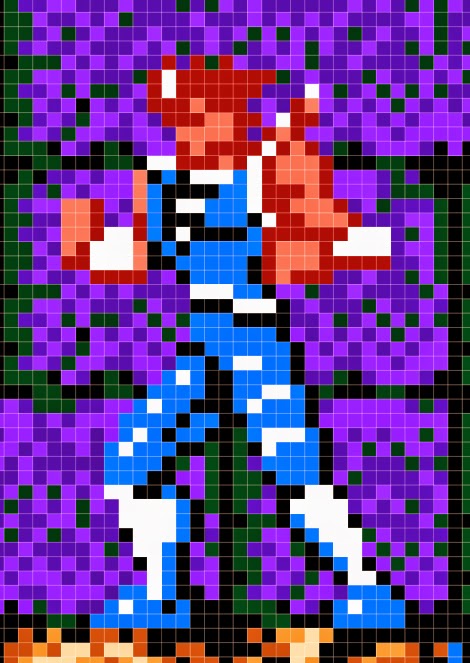 As to the garb with which I created my Hiryu, I stayed very much within the actual pixelated character I witnessed in the beta play that was shown me. The blue basic jumpsuit, with bare arms, and and bare head with very copper colored hair were representative of the Hiryu that inhabited the levels played by NES Strider fans. Perhaps unique to this hero were the indications of white  horizontal stripes on the legs of his jumpsuit, across his thighs, never to be seen again, to the best of my knowledge. The red scarf flowing in the breeze in later versions was not apparent in this version. The red kanji breast patch later seen was also not yet in place in the 1989 making of Strider. 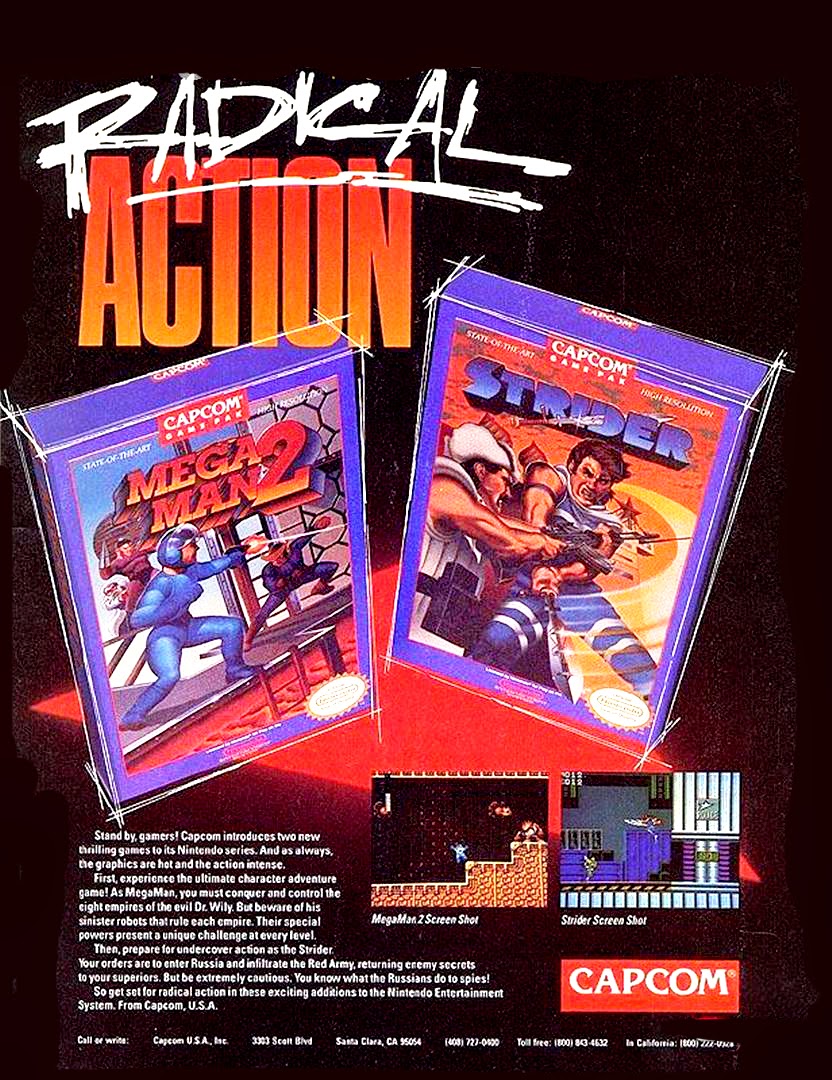 Another great source for Strider knowledge and background is Hardcore gaming 101, and thank you to Kurt for so much useful info!

Thanks so much for looking in, and best wishes to everyone for the Holidays!

The Strider artwork is so iconic and throws up feelings of nostalgia every time I see it. I just read the article over at eurogamer and managed to find the website, loving the articles I have read so far.

Would love to see a book with high quality prints published, it would be amazing.