On January 6th I received a interesting proposal From a Cinematic, a record label seeking my skills on an Album cover for a New York rock group called Caveman. After doing a bit of research into the band, and hearing the song list that they linked me to, I was definitely impressed. The sound was full, vibrant, nuanced, and thoughtful. It was solidly rock, and the band members fantastic. ...But why me?…As it developed, all of these young men were once kids who played games, and loved them! They remembered that art that I had produced and tracked me down, in no small measure, because the name they had chosen for this album was 'Otero War'. There's a smile to the naming, but it's not my tale, so I'll leave that to Matt and the boys to one day explain to their fans, which are legion, and growing. 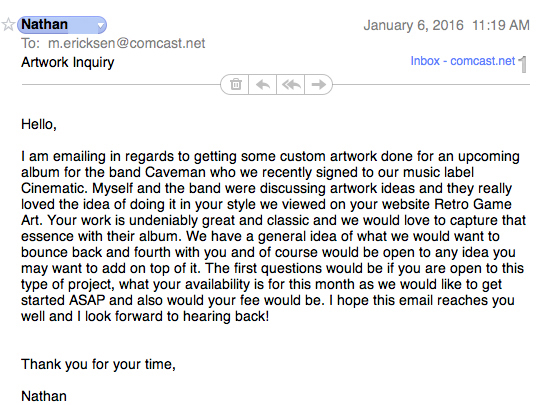 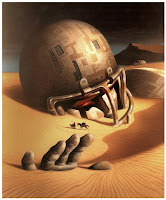 Clearly, the idea was intriguing, and I was anxious to chat with the band about their ideas. That task fell to Frontman Matt Iwanusa who was a delight to work with, and an inspiring artist in his own right, certainly to a guy like me, who can't carry a tune in a bucket. The rest of the band members are, Jimmy 'Cobra" Carbonetti on Guitar, Stefan Marolachakis on vocals and drums, Sam Hopkins on vocals and synthesizer , and Jeff Berrall on bass and vocals.The first task was to get an overall impression of the band's vision, which was one of  a world existing in the aftermath of war, mystery, and desolation. Much like the soul of one who struggles against the grip of love, and loss, or gain, with overtones of the adventures of one's youth spent partly in the confines of the world of gaming. Matt wanted a visual that felt game-like, and worked with the idea of war, entrapment, and release, all mirroring the concept of the entrapment of and the escape from, or to, relationships.

Of the first selection of images that I sent Matt, he chose as a guide a cover I had done for PC Games magazine in 1990. He enjoyed the isolation of the desert he saw, and that became our paradigm. He also mentioned the scale of the buried athlete This was the first appearance of what became the Battlebots in the final version.

So, I put together my first pass, very quickly done in photoshop, using elements of earlier illustrations and creating the landscape, featuring the Arcade game 'OTERO WAR' showing the scene itself as the deco on the game. As much as I liked this version, the clients desired that I minimize the Arcade game itself. This version eventually gave way to some more dynamic versions, utilizing Large battlebots as seen sketched here.


THE MOVE TO BATTLE BOTS

The Battlebots were derived from Matt's enthusiasm regarding the PC Games magazine cover I had done back in 1990. He was intrigued by the imagery of the giant abandoned Cyborg football player I had done for their sports games review edition.


The Battlebots were laid out as aftermath forms. The band wanted to create a feeling of desolation, along with impending destruction, hence the Tidal Wave I created in the background.

The Final Front album art reveals the downed Bot cradling a weapon on his left arm, as in the sketch, and color roughs, and as seen here, however Matt asked for the weapon to be removed, aiming for a less aggressive image.

THE FATE OF THE ARCADE:


THE FINAL BACK COVER

SHOWS THE BAND ESCAPING THE GAME AND THE DESTRUCTION

IT WAS A TOTAL BLAST… what a way to make a living!!

CATCH THE VIBE from CAVEMAN: OTERO WAR, at these spots:

Spotify….his one was a blast, and working with the band to get them exactly what they wanted was really special.

THANKS FOR DROPPING BY,
AND CHECK OUT
CAVEMAN'S
OTERO WAR

So awesome. Love the album and the artwork -- nice little read too.

jogos friv gratis
Jogos online
jogos 4 school
Thank you for your valuable thoughts. You have taught me how to survive the situation by creating a better plan. Visit